The story of a senior couple 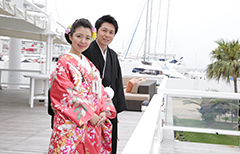 Two people working at the same company. Initially, we were considering a dinner for 10 to 20 people, but since this is a once-in-a-lifetime opportunity, I would like to take this opportunity to convey my gratitude. Such feelings were gathered, and the ceremony and party were also invited by the people in the workplace and friends. Coordination unique to this season and production unique to the two people are varied. We would like to introduce "Heartful Wedding," which provides a zero sense of distance between you and the guest.

Ceremony at the chapel. For the bale down partner, please ask the sister who is the top of the three sisters. The bride who grew up as the youngest child. At the time of the bale down, the two eyes staring at each other were moving. After the wedding, everyone will have a flower shower blessing. The smiles of the two were also impressive as the tension of the wedding was released. 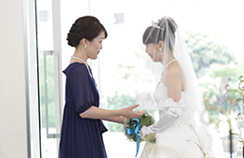 The effect of Teru Teru Bozu!

The two of us were worried about the weather, which is sometimes called the rainy season. On the day, with the wish that it would be fine, we prepared a cute "Teru Teru Bozu" for the microphone stand. As a result, we were able to perform welcome speeches, toasts, and bouquet pulls ceremonies using the deck without delay. At times, everyone was surprised at how effective the sun was! 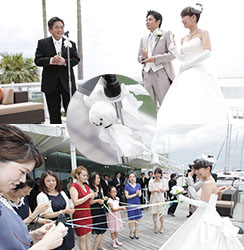 The killer whale is a big success! ?

The killer whales from "Kamogawa Sea World", the place where they remember each other, are very active at the party. As you can see in the picture, the two are doing the first part-time job. Turning to the wedding cake, the plate looks like a killer whale. While the two of us were sitting in the middle of the room, the stuffed killer whales were on the table, and we were able to take in our favorite items well at the party. 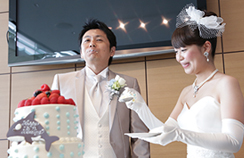 Beer service with thanks

The two are re-entered in new kimono. We carry beer tanks and serve beer with appreciation to each table. A groom who loves watching sports. The beer seller I usually see at the venue seems that the tank was heavier than expected. 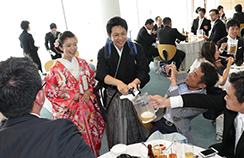 Surprise present from bride to groom

Suddenly, what was displayed on the monitor inside the venue was a congratulatory message from the professional soccer team, who are big fans of the groom.It seems that the bride went directly to the site and received it.In addition, the surprise continues.You will also receive an autographed uniform as a gift.Tears in the eyes of the groom to the happy surprise from the bride.It was a gift that made me feel the love from the bride to the groom. 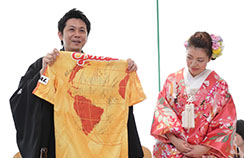