The story of a senior couple

Lots of fun productions! Happy wedding in the shape of ten years' thoughts 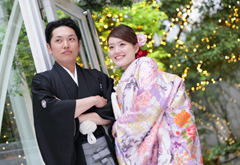 After 10 years of dating from high school, they came to the goal! ! According to a friend's story, the groom said, "Nahoko is the cutest!" " The bride and groom, who talk to Hakihaki and are friendly, and the bride who loves talking with a cute smile. And one more ... There are two babies on the bride's stomach. At the party, we will focus on [Wa], and we will introduce fun productions such as items with a perfect motif of cherry blossoms at this time ♪

The welcome board had Miyajima's [Shamoji] key chain, which had their name [Taku / Naboko] written on them. If you turn it back, it says "Ichi" and reads "Inase". This is the name of the two children who will be born in the future ♪ Actually, it has been decided that if a girl was five years ago, she was [Inase-chan]! It is said that the name of the child who went out to use in a certain program was [Inase-chan]. 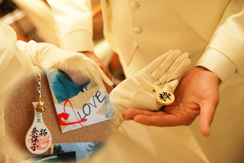 "I will introduce the best chefs later." ] And the groom. After that, when the bride urged the chef to introduce her chef and the guest turned to the open kitchen, there was! ! A groom wearing a cook coat and cook hat! ! "I'm asking my second chef today because I can't make it for my wedding today. ]. From Ito, the chef of Riviera Aoyama, "I am Ito, the second chef of Riviera Aoyama. ] Greeting. At the same time as the groom was surprised, the venue was filled with laughter! 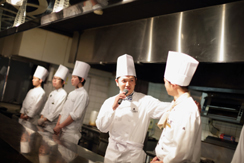 Grandpa, we will be happy!

He says he wants to wear a heavenly grandfather's kimono at the request of the groom. They are both in kimono. The tuxedo was good, but the monk's hakama was decided as well! On the other hand, the bride was dressed in a Japanese style perfect for a gentle atmosphere with a pale purple color! The back was also wonderful. The two people, who were recolored, said, "I'm glad I made a kimono." Your grandfather will surely be pleased. 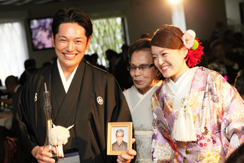 "I want to open the mirror! ] And the bride.I don't usually have the opportunity to open the mirror, but the groom has experienced it several times because of his work.The bride rarely has such an opportunity!I was really looking forward to opening the mirror from the time of the meeting.One of the congratulatory productions [Kagami biraki] Sake made from rice has a meaning as a sacred thing for a long time, and it seems that it was used for Shinto rituals, and after praying, it was drunk and drunk.It is one of the exciting productions even at weddings.

The groom's friend gave me a song called “Wrinkle”. It is said that they are usually performing separately as artists, but on this day they performed a celebration song in a duo. The mood is instantaneous during the venue.
Then, a festive surprise video was screened. They were surprised by the message of congratulations from many people and were very happy. 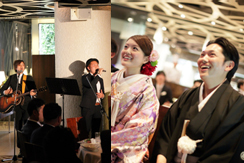